Catalyst for polymer-based adhesives and sealants

Dibutyltin bis-acetylacetonate is an organotin compound also known as dibutyltin ketonate, or abbreviated as DBTK. Due to its low melting point, the aggregate state depends on the ambient temperature, whereby impurities can also lead to liquefaction. In terms of color, DBTK ranges from yellow to orange tones and the odor is characteristic. Dibutyltin bis-acetylacetonate is stable and can be used well in MS systems. 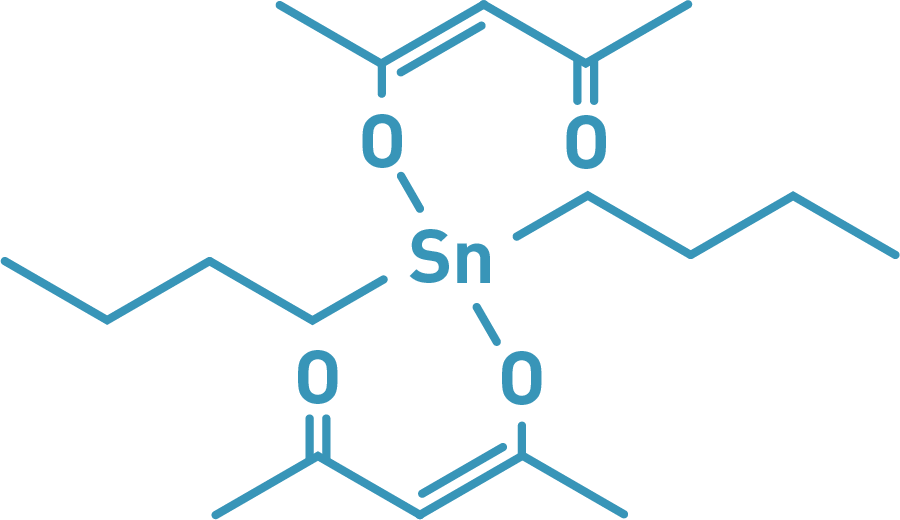 Dibutyltin bis-acetylacetonate has economic significance above all as a crosslinking catalyst, as an accelerator and an initiator for various applications, especially for two- or multi-component resins.

It is used as a plasticizer in adhesives and sealants and in polycondensation reactions for the production of RTV silicones and silane. For silicones in general, DBTK is known as a highly active catalyst. The same properties also make dibutyltin bis-acetylacetonate an option for polyurethanes, and is widely used in sealant and adhesives.

It is also interesting to use it in a catalyst combination for polymers that react to stimuli. The material surfaces can have different states with different physical properties, between which you can switch. Heat or cold can be an activator or deactivator for such a change.

Dibutyltin bis-acetylacetonate can also be used for the production of transparent conductive layers on materials, as well as for various dyes, surface finishes and for impregnation products.

Dibutyltin bis-acetylacetonate should be stored in a cool, dry environment and in tightly sealed containers. Good ventilation of the area should be ensured, as well as appropriate suction during processing. The formation of aerosols should be avoided.