Dibutyltin diacetate, usually called DBTA, is a tin-organic catalyst and stabilizer. The clear and colorless to yellowish liquid has a characteristic smell of acetic acid and is soluble in organic solvents such as toluene.

This durability opens up a wide range of possibilities, especially for plastics and applications in which curing times are to be influenced or in which materials are exposed to aggressive weather conditions.

The number of cycles of DBTA is higher than that of the standard catalyst dibutyltin dilaurate (DBTL). To reduce the typical smell of acetic acid and still shorten the reaction time, it can also be used together with dibutyltin dilaurate, using mixing ratios of 1:9 to 1:4. 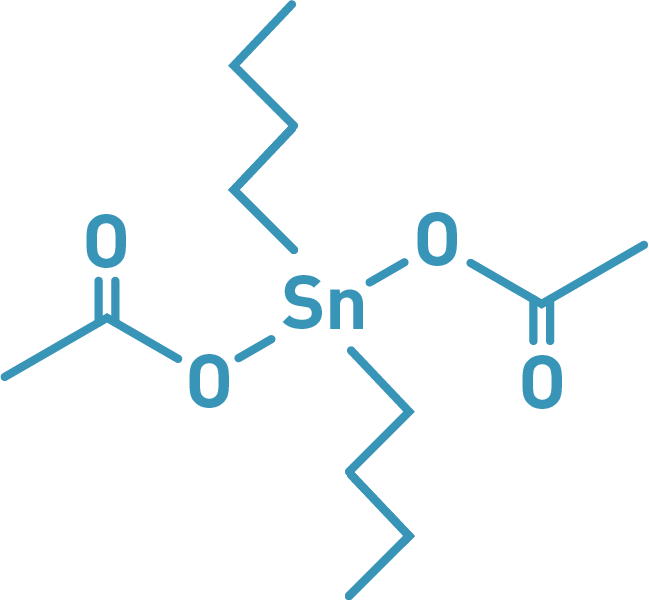 DBTA in Adhesives and Sealants

Dibutyltin diacetate is mainly in demand because of its effect as an esterification and transesterification catalyst and many adhesives and sealants use DBTA when a particularly fast curing speed is required, which cannot be achieved with the standard DBTDL.

It is often used in silicone sealants, with special advantages for RTV silicone rubber, which are used in the automotive sector. Its high activity makes DBTA a particularly fast catalyst for cold-curing silicone casting resins.

These characteristics are also transferred to polyurethane-based systems, where dibutyltin diacetate controls the curing time in PU adhesives and casting resins. The area of ​​sealants also includes the catalysis of silanol condensation reactions in silicones for joints and seals.

The same catalytic properties that make DBTA an interesting curing catalyst for adhesives and sealants can also be applied to coating systems. It is known as a highly active catalyst in urethane-based paints and coatings for the automotive industry and in other industrial applications.

Another field of application is oleochemistry, in which DBTA plays a role in transesterification reactions and is used in the production of synthetic lubricants and antioxidants. Esters for cosmetic applications, surfactant esters, fatty acid esters and acrylic acid esters can be effectively synthesized by the liquid catalyst due to its high conversion rates.

DBTA is delivered in steel barrels or PE canisters and can be stored for at least 6 months without any deterioration in quality, as long as the original packaging is unopened. When stored below 15 °C, turbidity may occur, but has no impact on quality. The turbidity disappears when heated.